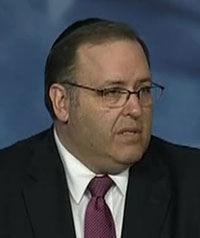 Jeff Ballabon is chairman of the Iron Dome Alliance and a senior fellow at the Center for Statesmanship and Diplomacy. He is a political and media strategist, a conservative leader and a Jewish activist. He represents corporate and non-profit clients, consults for elected officials and political candidates in America and Israel, and has the headed communications and public policy departments of major media corporations including CBS News, Primedia, and Court TV. Jeff also is of counsel to a law firm that represents the State of Israel’s interests at the International Criminal Court at The Hague and is among the leaders of the anti-BDS movement.

Jeff has successfully represented American victims of Palestinian terror before the White House, State Department, Justice Department and Congress. He founded and ran the Coordinating Council on Jerusalem, a groundbreaking international coalition credited by the White House with defeating the Annapolis Conference’s proposed division of Jerusalem. Among Jeff’s other initiatives are Young Jewish Leadership PAC, Jewish College Republicans, and SHABBAT@CPAC.

Washington Legal Times has described Jeff as “a quiet presence on Capitol Hill,” who “travels easily in conservative circles.” The New York Observer observed that he “is very well-known at the highest levels of the White House” with “friends on both sides of the political divide” and Politicker has reported that he has “actual power in Washington.”

A veteran of four presidential and over a dozen House and Senate campaigns, Ballabon was widely referred to in the press as “the architect” of the successful BushCheney 2004 re-election effort in the Orthodox community. As the Forward wrote, “Ballabon basically created a new demographic…he helped put his fellow Orthodox Jews on the map as a separate Republican Party constituency.”

A graduate of Yale Law School, Jeff served as Republican Counsel to the US Senate Commerce Committee and was Legislative Counsel to Sen. John Danforth (R-MO). He has twice been a Presidential Appointee, and received two Certificates of Distinguished Service from the US Senate. The Forward has named Jeff one of the 50 “Most Influential” Jews in America.