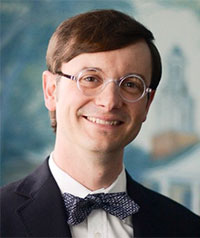 Gregory Alan Thornbury, Ph.D., serves as the sixth President of The King’s College in New York City – an institution dedicated to faith, free enterprise, and The American Dream. Called “America’s first hipster college president” by The American Spectator, Dr. Thornbury is also a Visiting Professor at the Values and Capitalism initiative of the American Enterprise Institute; a Senior Fellow for The Kairos Journal; a columnist for Townhall.com; and a member of the editorial board of the Salem Media Group. His recent books focus on the relationship between philosophy, theology, and culture. They include Recovering Classic Evangelicalism: Applying the Wisdom and Vision of Carl F. H. Henry, and Bigger on the Inside: Christianity and Doctor Who, with graphic artist Ned Bustard. His forthcoming work, Only Visiting This Planet (Penguin/Random House, 2016), is a biography of the 1970s Jesus Movement icon and rock pioneer, Larry Norman, whom Thornbury calls, “the forerunner of the millennial generation’s attitude toward religion.”

Prior to joining King’s in 2013, he served at Union University in Tennessee as a Professor of Philosophy, Founding Dean of the School of Theology, and Vice President. He has completed graduate work at Southern Seminary in Louisville and the University of Oxford in England. A popular campus speaker and lecturer, he is also a member of the Society of Christian Philosophers.

Dr. Thornbury and his wife Kimberly, who also holds the Ph.D., have two daughters and reside in Manhattan.

Gregory Thornbury spoke on the topic: “Jews and the Future of Christianity”