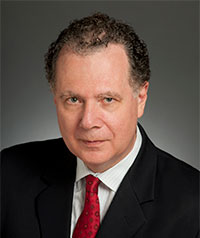 David P. Goldman has written the “Spengler” column for Asia Times since 2001. He is also a columnist at PJ Media. His articles on Jewish philosophy and culture have appeared among other places in Tablet Magazine, Hakirah, and First Things, where he formerly was Senior Editor. He also has published in Forbes, The Wall Street Journal, Claremont Review of Books, Commentary, Standpoint and numerous other venues. He has published two books, “How Civilizations Die” (Regnery) and “It’s Not the End of the World, It’s Just the End of You” (RVP Publishers). He separately pursued a career in finance, directing global debt research and Bank of America and credit strategy at Credit Suisse. He davens at Congregation Kehilath Jeshurun in New York City.

David Goldman spoke on the topic: “Facing the West’s Competitors”