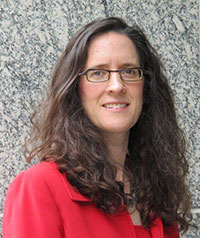 Alyza D. Lewin is an attorney in Washington, DC.  She specializes in litigation, mediation and government relations. She currently practices law together with her father, Nathan Lewin, at Lewin & Lewin, LLP.  Her work involves criminal defense, civil litigation and anti-discrimination matters.  Ms. Lewin has also been trained as a mediator by the American Arbitration Association and the Center for Dispute Settlement.

In November 2014, Ms. Lewin argued Zivotofsky v. Kerry before the U.S. Supreme Court. This separation-of-powers case involved the constitutionality of a law granting any American citizen born in Jerusalem the right to list “Israel” as the place of birth on his/her U.S. passport. Ms. Lewin was involved in the 12-year pro bono litigation conducted by her firm in the District of Columbia courts and in the Supreme Court of the United States.

While with Lewin & Lewin, Ms. Lewin has handled numerous cases of interest to the Jewish community. The firm represents Agudas Chasidei Chabad (the umbrella organization for the international Chabad-Lubavitch movement) in its efforts to obtain the release from Russia of the community’s library and archives unlawfully seized by the Soviet army after World War II. The Lewins also successfully represented the Boim family in its landmark civil tort litigation which established the right of American victims of terror to obtain damages under American law against organizations that knowingly provide financial support to international terrorist groups.

Prior to establishing Lewin & Lewin in May 2002, Ms. Lewin worked at Wilmer Cutler and Pickering (now WilmerHale) and at Miller Cassidy Larroca and Lewin.  Ms. Lewin began her law career in Israel where she clerked on the Supreme Court for Deputy President Justice Menachem Elon. Ms. Lewin is President of the American Association of Jewish Lawyers and Jurists (“AAJLJ”). She is also a member of the Board of Directors of the Jewish Community Relations Council (“JCRC”) of Greater Washington. Ms. Lewin served on the Board of Directors of the Women’s Bar Association of the District of Columbia from 2001-2004.

Ms. Lewin is admitted to practice in the District of Columbia and New York.  She received her B.A. from Princeton University in 1988 and a J.D. from New York University School of Law in 1992. She is married to Eliezer M. Halbfinger and has four children.

Alyza Lewin spoke on the topic: “The End of Religious Freedom?”